The destroyer, despite being the smallest and the lightest armed and armored ship, is quite honestly the most important ship of the fleet. A fleet with no destroyers is a sunk fleet.

Therefore it is quite understandable that the tasks of a destroyer is hard to overemphasize. Bad destroyer captains will lose you the battle.

- and anytime it is possible/required going on the offensive to sow chaos/sink enemy forces.

So let's talk in detail (With pictures!) one by one.

1.Scouting the enemy forces in the beginning of the match

FIRST RULE OF DESTROYER TACTICS IS TO NOT SAIL STRAIGHT.
The moment you are engaged in combat or spotted, you should never sail straight. Ever wondered how you got hit by a BB's main battery guns? It's because you sailed straight. You can reduce the chance of taking damage significantly if you maneuver properly. It is also recommended that you always sail at maximum speed.

The one tactic that would require killing speed is only recommended in desperate situations. 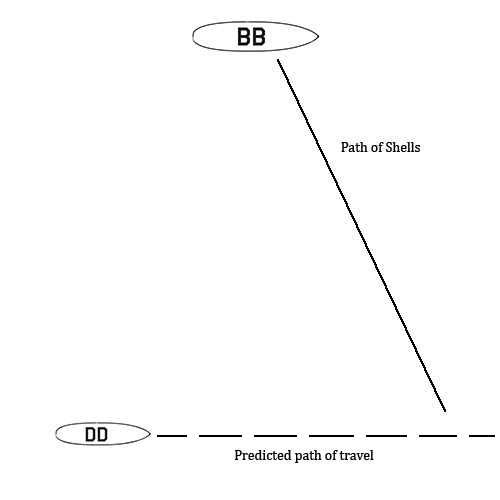 Due to DD's fast speed, unless you are at extremely close range, enemy forces have to shoot way ahead of your actual ship in order to hit. In desperate situations you can change the gears to a full reverse right when the shells fire, coming to a screeching halt. This will make all enemy shells currently in air to miss. However, this is not recommended as a consistent tactic, for a few moments after the maneuver, you'll be extremely vulnerable to enemy fire, due to your lack of speed.

Moving on, the general way to scout in a DD is to sail at 100% throttle, sail to west/east/center zone, scout enemy scouts and overly eager CLs who think they're in DDs, and fall back. This maneuver is fine, but you should try to take the least amount of damage doing so. The best maneuver to do while scouting is to slither. This maneuver makes accurate leading next to impossible, and even if somehow they do manage to accurately lead, allow an opportunity for the shells to fly over your super structure. 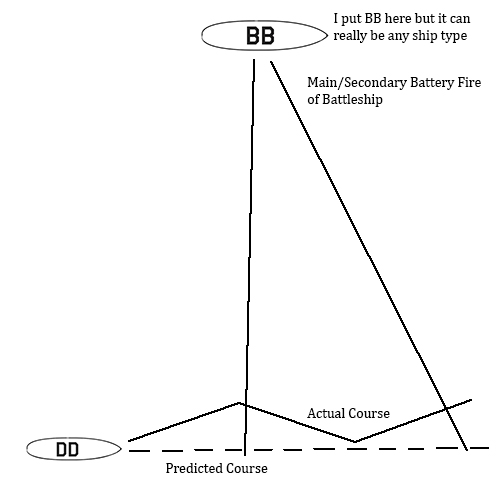 This maneuver can be used against any ship types, and should be used almost always. Speed and maneuverability is the destroyer's armor.

This generally happens from the initial scouting until one side loses all its destroyers. There's really nothing too complicated about this. the best way to accomplish this is to fire your guns and spread out your torpedoes, distrupting enemy force's formation and even possibly hitting a few oblivious ships. While firing, however, do not sail straight. Your main battery fire should be as accurate as possible, but this should not be accomplished at the loss of your ship or health. Always try to minimize your loss, even if that means doing less damage. Your prescence on the seas is more valuable than necessarily doing alot of damage. As long as the enemy scouts are forced to retreat, your mission has been accomplished. If you come across heavy opposition, retreat yourself.

To be a truely good DD captain one must learn to scout. Scouting requires you to be the vaguard of the fleet, and be agressive all the while not overextending. BBs and CAs have limited range, and if you overextend you will be left spotted with no fire support. You want to keep in mind the range of the ships you are sailing with.You also want to not shoot your guns or launch torpedoes if you are not spotted, since your guns would do very little damage, and your torpedoes would make the enemy force maneuver, which would make leading for your friendly ships harder. 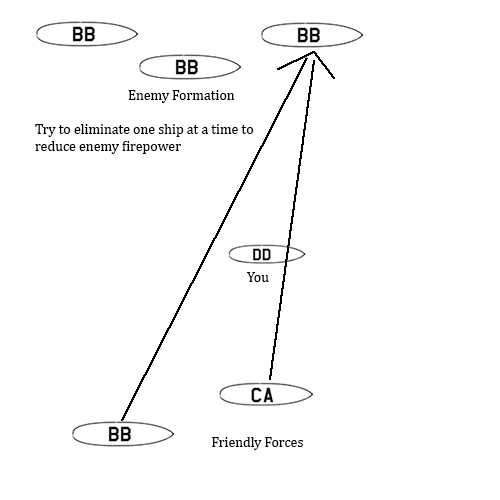 Even when you are spotted, try not to use torps if possible. Keep a parallel slithering maneuver and annoy the enemy force, directing the fire to yourself. This will allow your friendly forces to have an easier time killing them. If you are facing heavy enemy fire, use a Smoke round inbetween you and the enemy ships and fall back, to repeat the same scouting maneuver after you are unspotted.

While located in the vanguard, you should try your best to prevent enemy aircraft to pass you without a good volley of AA fire. Never depend on the smaller caliber AA, and use the manual AA yourself. Note that you should immediately fall into the slithering maneuver while you perform the anti AA maneuver, since you'd most certainly be spotted. You should aggresively shoot down enemy aircraft, and generally make enemy carriers very annoyed.

Subs are slow, and slower underwater. Generally speaking, by the time they can approach friendly battleships, the match is well underway. You do not want to fight enemy subs with DCs when there are still significant enemy surfrace combatants. 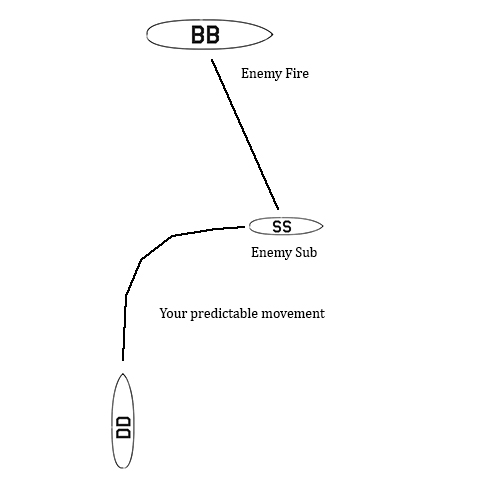 DC’ing SS that have surface support is an easy way to get killed, since the surface support can basically fire on their own SS, and hit you, whose movements become very predictable. You want to engage subs which have become isolated or when enemy surface combatants are either dead or busy.

Most optimal approach on a SS is to approach from the side and to turn into the rear, since there are less torpedo tubes in the rear, and SSs are much slower than you. Sailing up from behind them gives you the longest area to DC them, compared to shooting them from the side. However, if you can't, or are too worried about getting hit by the SS's torps, you can just sail up from the side.

5.Going on the offensive

In times of desperation or when the enemy team lacks scouts, you can go in for a close in torpedo attack. By close in, I mean anywhere from 1km~650m. Torpedo safe range is around 600m, 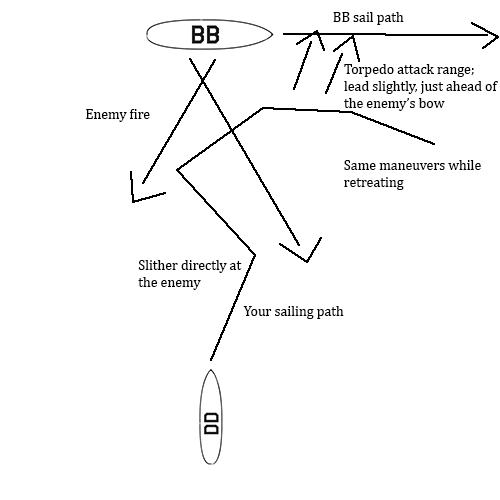 When you perform this maneuver, it is critical that you maneuver hard, but still keep a decent speed towards the enemy. I strongly advise that you smoke your advance as much as possible, to minimize your chances of being spotted. When you reach 1~1.5km, Turn towards the direction of the enemy ship's sailing path, putting yourself parallel to the enemy. You do not want to be chasing the target, if the enemy ship is running away from you, and presenting a perpendicular target to you, pull back, for you will almost never hit him. Another point of note is that you should try to conserve your torpedo usage. Save a few torps just as a safety mesure, incase your other torps miss.